Squeezebox Goes to Gravelines May 2016

There are milestones we all know in a baby’s life: getting off the bottle, their first words, taking solid food, getting out of nappies, and so on. Learning to sail is rather similar. My sea-milestones have been taking my first solo trip in spring 2012, first solo passage to another harbour and overnight stay in summer 2012, first solo Channel crossing in summer 2013. Not to mention deliberately going out in Force 6/7 in autumn 2013 to experience the effects on the grounds it was better I knew what to expect if ever it happened on a longer passage.

In 2016 I knew there was one important milestone I had not addressed. I had never been to a drying-out harbour, one that has little or no water in it at low tide. Squeezebox has twin keels, two half-ton lumps of cast iron underneath the hull. It is a bilge keeler and that means it can be a ground and stays as level as that ground is without falling over or hurting the propeller. This is in contrast to a fin keel which hangs directly under the hull.

The most obvious place for me to go to was Rye, which has a drying harbour. But I had read about Gravelines, a small marina rarely visited two miles down a cut from the sea between Calais and Dunkirk. It looked interesting so that was my target.

My passage plan involved catching a flood (incoming) tide to carry me up the Kent coast for some 30 miles, turn sharply to starboard somewhere off Dungeness, and cross the lanes of the TSZ (traffic separation zone) to Boulogne. Stay a night then catch the favourable tides and winds to Gravelines.

I left at daybreak and motorsailed atalmost 6 knots for five hours in bright sunshine, calm seas and slight winds. Nice. But in the Dover Straits there are high speed ferries as well as freighters to contend with.

The approach to Boulogne is easily identified by a large lighthouse on the starboard side of the entrance. The navigation instructions are turn sharply to starboard inside the sea wall and run parallel with it up to a large painted white square. At this point take a course of 123 deg directly towards the harbour entrance.

The tidal range in Boulogne is almost 30ft: see how far below street level the large fishing boats are. The ramp up to the marina office was likewise very steep. The structure in the middle picture is a disused ferry terminal.

I have been to Boulogne on several occasions so did not bother to leave the marina. I felt lucky I was able to moor very near the harbour office........until a disco in the club above started. In went my earplugs. 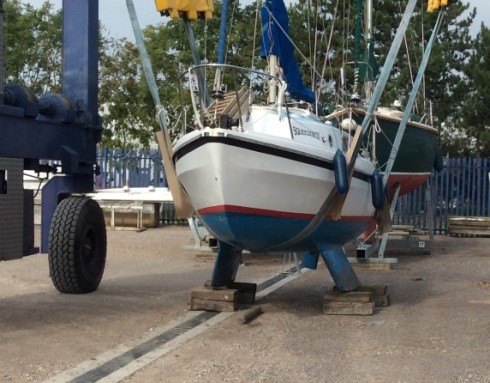 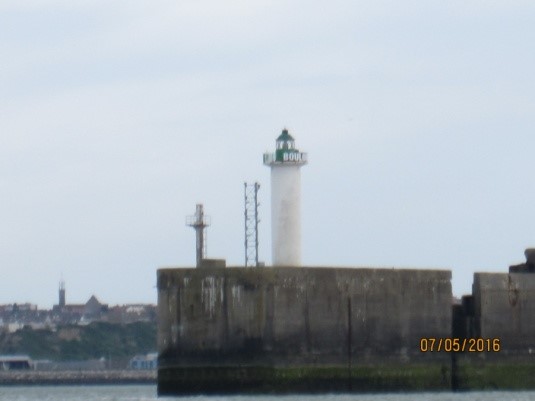 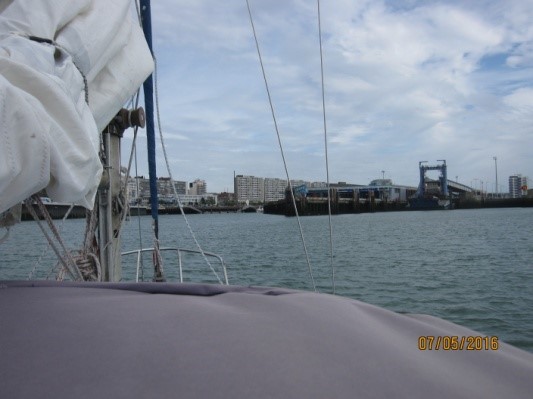 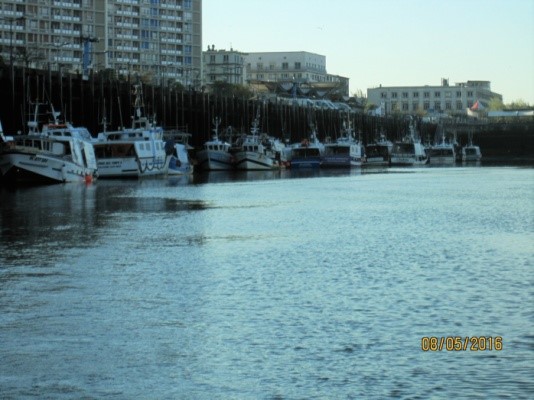 Fortunately it quietened down after midnight. The following morning at 8.30am after a big breakfast I set off for Gravelines. The wind increased to force 4 to 5 but it was mainly from the east and I was headed north so once I had optimised the sails Squeezebox went into warp drive, at over 7 knots.

There is actually a formula for calculating the maximum speed through the water of a displacement vessel (i.e. one that does not plane). It is the Froude formula, named after the guy who worked it out for the Royal Navy some 180 years ago. It is the square root of the length along the waterline multiplied by 1.34.

Squeezebox is 22ft along in this respect, so its theoretical maximum speed is √22 x 1.34 = 6.3kn. That tells me I was getting over a knot of extra speed from the tide. If you try and go faster than this, the bow wave gets bigger but you go no faster. In fact a bow wave reaches the back of a boat at its top speed.

Going past Calais required keeping out of the lanes that the ferries use when leaving the harbour, but visibility was good and the buoys exactly where my charts said they should be. At one point I counted four ferries, nine freighters and four sailing yachts all within three miles. The ferries come steaming in and out at quite a speed.

I continued along the coast round the aptly named Cap Gris Nez and headed northeast towards Gravelines.

The sun shone warmly and the wind faded as I approached the two large breakwaters jutting out to sea marking the entrance, a good 200ft wide. Time to turn into the wind and take the sails down. 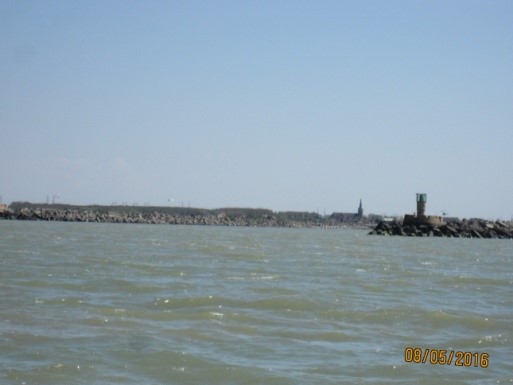 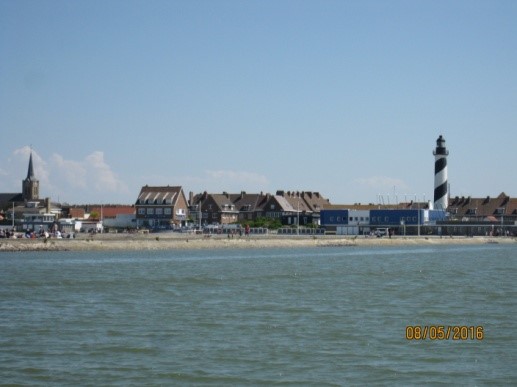 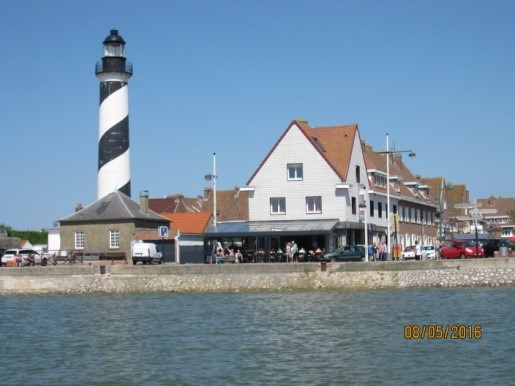 It was approaching high tide by now. Kids were playing on the sandy beaches either side, teenagers were jumping off the breakwater into the cut, and cyclists waved at me as they pedalled along the breakwater.

As I approached the marina entrance, flanked by large lock gates, I radioed the harbour office and a young man came out to meet me at the visitors’ pontoon. He even helped me tie up. At the office formalities were brief and he gave me a key to access the toilets and showers, WiFi instructions and some nice tourist leaflets. Only 27 euros for two nights. I was the only visitor the whole time I was there, and felt appreciated. 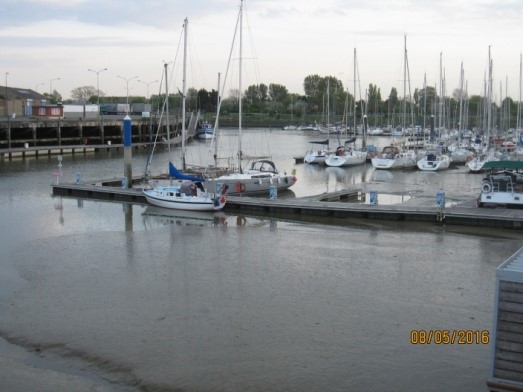 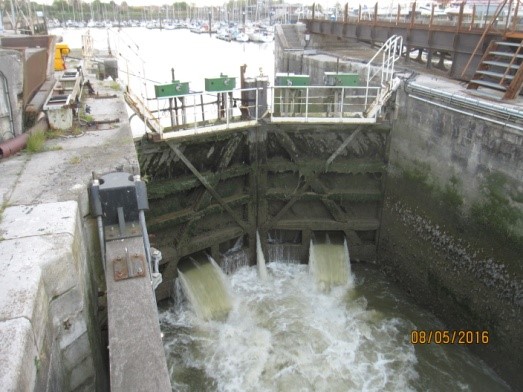 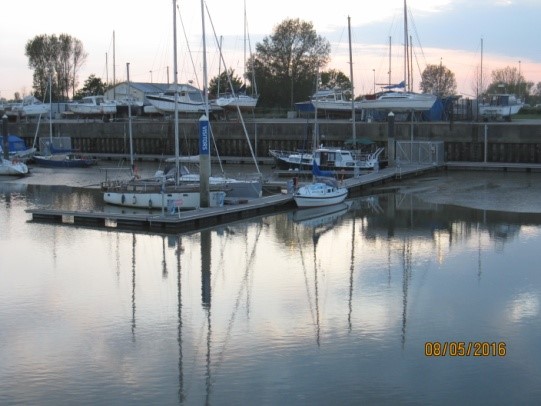 After showering and as I prepared a meal I felt the boat settle into the mud after the lock gates shut and the tide ebbed. No problem about beer, there was a Lidl just 100 yards from my mooring.

It was a peaceful night and I slept soundly. The town centre is pretty and is actually inside a large fort, Fort Philippe, with lovely views over the countryside. Couldn’t find any military memorabilia but there were a lot of larger than life-sized bronze statues of naked women. Must be my age but I can’t see the connection. Interesting though. The fort has large moats all around it but navigation is not permitted. 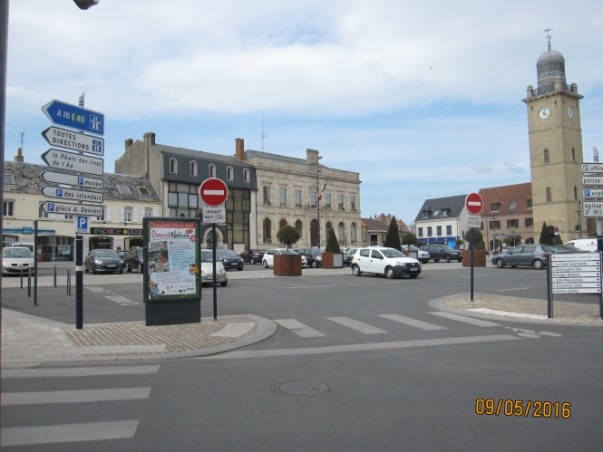 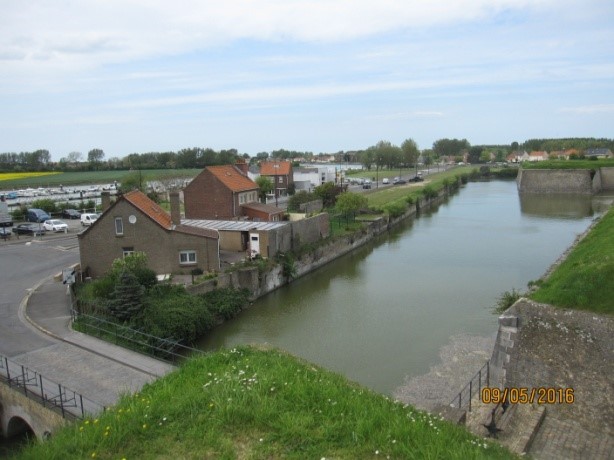 The second evening I reckoned I needed diesel fuel so walked to a Super U half a mile out of town with my euros, only to find it was unmanned and had those card readers. So walked back to get my credit card and returned with my 5L and 10L jerry cans then trudged back.

Good exercise requiring the consumption of several bottles of beer once I got back to the boat.

That night I consulted the tide tables and several weather forecasts and decided to leave before 3am in the morning when the lock gates were open.

As I left it was raining steadily and it was with some trepidation I navigated down the cut in near darkness, narrowly missing the town’s unlit moored lifeboat. Once out at sea I relaxed and set sail towards Calais, reaching it a couple of hours later at dawn.

The radio is tuned to Ch16 at sea but when passing a busy port you tune in to their local channel for any instructions. In fact for Dover you have to use Ch74 to seek permission to enter or pass it. I was listening on Calais Port Ch17 whilst keeping a close eye on two ferries heading towards it. I heard a ship’s officer complain to the port that there was a French fishing boat right in the middle of their approach lane and their ferry was having to go so near to the beach they were afraid of running aground. He added that they had seen no signs of life on the boat and feared there may have been an accident. Good job the passengers couldn’t hear him.

The guy in the port seemed unconcerned but then the second ferry arrived and had a right go at him in a tense polite manner through grated teeth. After some minutes the port guy said they had established contact with the fisherman and he was going to move his boat. Sure enough the second ship reported movement on the fishing boat’s deck. Only the French would fish in a ferry lane, it’s like having a picnic in the middle lane of a motorway. My theory is the fisherman had supped a few brandies whilst night fishing and was sleeping it off.

The weather improved as I continued motor sailing at some speed back across the TSZ into British territorial waters and down the coast past Rye, Hastings and Bexhill. Although bright, visibility was scarcely a mile as I approached Sovereign Harbour and gratefully berthed after my longest non-stop passage of 75 nautical miles in a little over 14 hours with a maximum speed of 7.8kn. In three passages totaling some 30 hours and 160 nm of motor sailing the little 10hp Beta engine did not miss a beat, sipping fuel at the rate of about 1.2L per hour.

I sometimes think there’s more life in Squeezebox than there is in her skipper! 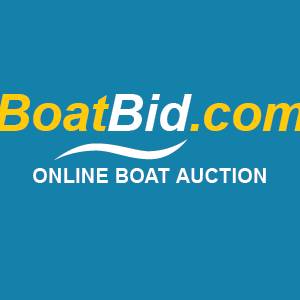