Circumnavigating the UK in a Leisure 27, Part 4 - Wells - Weather Bound! 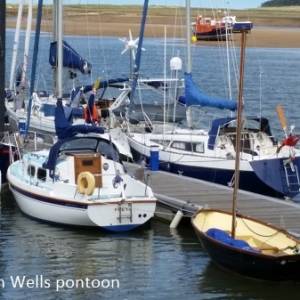 It's possible I could be weather bound for a complete week in Wells whilst northerly gales howl down the harbour, often accompanied by heavy rain, and the temperature never rises above 11 degs.

In Wells the pontoon berths are exposed to a mile long stretch of water, so its pretty bouncy at high tide and you get used to seeing small breaking waves rolling past the cabin window.

A strong stomach is required to cope with the pitching up and down and the snatching of the mooring lines. Meanwhile reports from Edinburgh confirm the warmest and best weather (22 degs) for a very long time.

Had I set off a week earlier, I would have missed this horrible weather system which has arrived from Europe.

Maybe this is a heaven-sent sign to vote NO in the referendum of June 23rd. We must stop this apalling European weather from sneaking across the North Sea.

The daily migration
I am getting to know Wells fairly well! There is a huge,static caravan site near the beach, at the harbour entrance.

Between the town and caravan site is a raised causeway which also acts as a flood defence. Being a Bank holiday weekend and half term, the caravan site is chock full with children and dogs.

They migrate in the morning along the 3/4 mile causeway to the town and then reverse the journey in the afternoon.

Walking out on this narrow causeway to the Coastguard lookout at the harbour entrance in the morning against the tide of parents, children, prams, bicycles and dogs, is something you do only once.

The pubs
There appear to be only three or four pubs left in Wells (there were nine in 2002). The Golden Fleece and The Globe appear to be Free Houses. The Crown Hotel is part of the Boutique Hotels Group.

There is also the Edinburgh Inn, but for some reason I never tried it.

The only pub on the sea front/quayside, The Golden Fleece sells food from 9 am and operates like a mini Witherspoons, but without the cheap beer and a bar on which to lean. However it's rammed tight all day long.

The search for a quiet pint involves a walk up the hill behind the quayside, where beside a village green lie The Globe and The Crown.

The Globe looks purely gastro but the Crown is a proper pub/hotel offering accommodation, a traditional bar, comfortable armchairs, attractive dining room and free copies of the Times and the Telegraph.

I think I went there a few of times and will always cherish the thought of their fresh crab sandwiches!

Gillying - a family activity
Talking of crabs, apparently gillying in Wells is a family pursuit that has passed down through generations. It's known in Littlehampton, West Sussex, as crabbing, but in Wells it's practised on a different scale.

On a windy and wet Bank Holiday Sunday, the long quayside is packed with family groups armed with the usual bacon-baited lines, nets and buckets of water.

However the volume of plastic lines, line winders and buckets which are left behind in the water has caused an environmental backlash.

As the port authority handbook says "86% of ocean debris comes from plastic which degrades through solar radiation and oxidation into smaller pieces, but still exist as plastic polymers which are ingested by marine life".

To their great credit, Wells Harbour Authority offer a practical own solution. They rent the gyllying (crabbing) equipment for £6 deposit, with £5 refunded on its return. The hired equipment features wooden line winders and metal buckets.

"I'm a little gilly crab, I live in the sea by the quay I don't mind you catching me but please dont' hurt me Please give me sea water enough to cover me When the weather is hot, change my water regularly as it could boil me Don't overcrowd me it squishes me and others may eat me Look after me, put me back gently where you found me Back in the quay where another day you may once again catch me"
Discuss the above while tucking into a tasty, fresh Wells crab sandwich and a packet of crisps.

Duplication Is The Key
Inevitably on a trip like this, things will break or just stop working so where possible, essential items of equipment are duplicated, but it could be thought that carrying two sleeping bags was being a touch over cautious.

A couple of nights ago whilst dozing off, I woke with a start thinking incontinence was upon me. It was a relief to find that a cup of tea in my hand, had overturned.

However it was a cold night. A wet sleeping bag could have been a bit of a disaster had a reserve bag not been to hand. Dozing off with tea in hand is a worrying development....

There is a glimmer of light at the end of this windy, wet tunnel. Escape might be possible on the early 06.00 high tide on Saturday mornng.

Fingers crossed, Grimsby next. Its warming up here, 11 degs yesterday, 12 degs today. Not seen the sun for a week.

The forecast has changed again: fog then northerlies force 4/5. This is right on the nose for much of a nine hour trip, into a 6 foot swell. Not for this faint hearted single hander.

The wind has been blowing at 30 mph for 6 days straight down from the North Pole before hitting the beach at Wells. It will take a day or two for the 2 to 3 metre swell to quieten down.

At high tide yesterday I spied another Leisure 27 (same type as Dark Star) moored across the creek. "Windrush" is owned by Mark Ashby who duly came over to visit this morning.

That meant the boat had to be made reasonably tidy and I have taken the opportunity to record the occasion. I hope Val is impressed by the fruit display in the roasting tin. Good improvisation?

Food Parcels!
Owners of another Leisure 27, Avocet, also moored in Wells, come to visit complete with two lots of home made soup! They are very hospitable in Wells!

The wind is dropping but now fog has arrived! Can't see beyond 100yds this morning, but it looks as if escape will be possible on Monday or Tuesday with the weather set fair for a good run up the coast.

Today I have a surprise; a very enjoyable lunch with LOA stalwarts, Barri and Marjorie Hopkins who made the 5 hour round trip up from West Mersea to give encouragement to this weather bound sailor.

When we all return to have a look at Dark Star, we discover in the cockpit, a barbecued chicken in tin foil, still hot and presumably left again by the owners of Avocet! People are amazingly kind!

Thanks for reading this 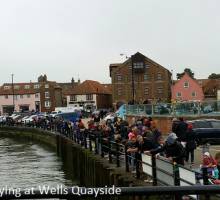 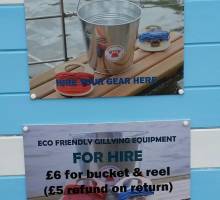 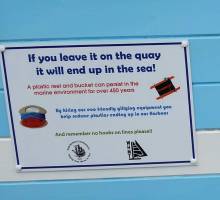 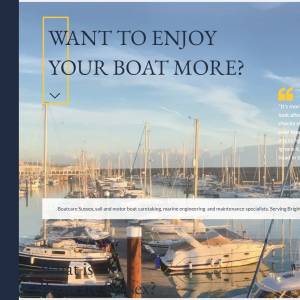